Auctioning off the 'World Wide Web'

The World Wide Web (WWW), commonly known as the Web, is an information system where documents and other web resources are identified by Uniform Resource Locators, which may be interlinked by hyperlinks, and are accessible over the Internet. The resources of the Web are transferred via the Hypertext Transfer Protocol (HTTP), may be accessed by users by a software application called a web browser, and are published by a software application called a web server. The World Wide Web is not synonymous with the Internet, which pre-dated the Web in some form by over two decades and upon which technologies the Web is built. (Source :wikipedia) 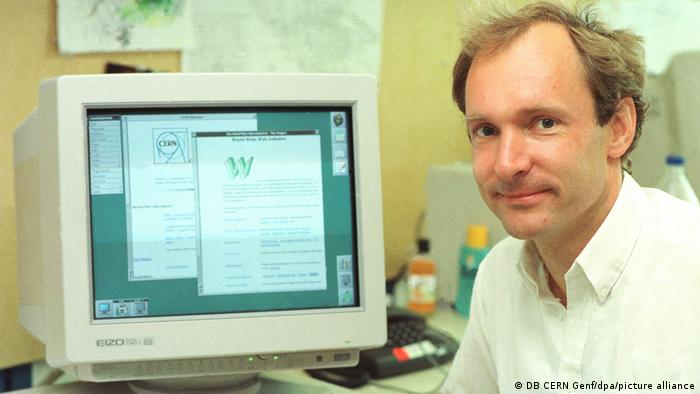 Internet history under the hammer: Sir Tim Berners-Lee's source code of the World Wide Web is being auctioned off as an NFT, as the market for digital art expands.

They are attached to the digital object and identify its authorship, cannot be manipulated or forged.

Digital art has undoubtedly found its place on the established art market and is set to revolutionize it.

In March, Christie's sold Everydays: The First 5000 Days by digital artist Mike Winkelmann, known as Beeple, for $69 million (€58 million). In one fell swoop, it made him the most expensive artist in the digital sphere, and it was the third-highest auction price ever for a work by a living artist.

To own a piece of internet history

Sotheby's also sells digital art. Historical artifacts like the source code of the World Wide Web are of great value to digital natives - and that is why, it is now going under the hammer, in an auction ending on June 30.

On March 12, 1989, British computer scientist Tim Berners-Lee submitted a proposal for an information management system while working at the European Organization for Nuclear Research (CERN) in Geneva, leading to the invention of the World Wide Web.

The internet pioneer felt it was logical to sell his code as an NFT, as quoted on Sotheby's website: "NFTs, be they artworks or a digital artifact like this, are the latest playful creations in this realm, and the most appropriate means of ownership that exists. They are the ideal way to package the origins behind the web."

The auction of the source code is one of a series of spectacular auctions of 20th-century pioneering technical products.

Non-fungible tokens have great potential - every bit of information about transfers and owners, whether private individuals or museums, is recorded on them, giving artists have more influence on the (re)sale of their artworks. They are like a kind of "value register," according to art expert Georg Bak.

According to Bak, "This is the initial phase, and there are still some problems to be solved. But this is not a hype that will pass; this will fundamentally change the art market, and maybe beyond" .

Currently, a parallel process is underway, with market platforms like Open Sea generating more and more sales and negotiating what is of value.

Investors, collectors or artists drive the market, a fact major auction houses have recognized, so they have begun to offer interesting artifacts. NFTs are even on sale on Ebay.

Sotheby's for one is electrified by the new possibilities. "At Sotheby's we see NFT as a once in a generation opportunity to create a bridge from the digital world to the institutional auction world," according to Cassandra Hatton, Global Head of Science & Popular Culture at Sotheby's.

"The NFT technology is one of the greatest innovations in the market we have seen in some time, the possibilities are endless and the story about how it will develop is only just at the beginning". "To put it all into context, the source code to the web is a digital artifact that has existed since 1990, but until NFTs it would not have been something that we could ever have sold."

CryptoPunks, by US cryptoart entrepreneur duo Larva Labs was the first NFT to hit the market in 2017 - 10,000 pixelated punks wearing 1980s looks. The original was released as an NFT, which means all changes of ownership can be tracked.

Nine of the original CryptoPunks were auctioned at Christie's in May for just under $17 million.

Sotheby's recently focused on a mix of historical crypto art including by Larva Labs and Kevin McCoy, generative art stars like Anna Ridler, and digital artists including Mario Klingemann and Addie Wagenknecht.

Auctioning off the entire net culture

"The whole cultural history of the internet, net culture and generative art will be auctioned off". "Both museums and traditional collectors now take it seriously" and - even if they are still adjusting with regard to the many new artists and digital objects.

The main problem with digital art used to be that it was too easy to reproduce and often coupled with potential hardware problems.

People were also concerned that the technology might soon become obsolete. That was a deterrent for ordinary collectors for a long time.

In the case of the NFT, only one digital file is transferred, and that is the original. There are no packaging and shipping costs, no customs fees.

It caught the art market off guard and triggered a new phase of reflection.

The emergence of hybrid forms of art

At the same time, leading auction houses are getting involved in the formation of a new art canon in the digital realm and are familiarizing regular collectors with digital art.

It's a win-win situation for both sides: "Now collectors are negotiating digital culture." It's exciting for the artists and the business community, too. New forms to present art are emerging, including many hybrid forms.


Sir Tim Berners-Lee's source code currently on offer at Sotheby's includes the original file with time stamp and signature, along with an animated visualization of the source code, a digital poster with the complete code, and an essay by Berners-Lee about his code.

The sky is the limit for imaginative forms of representation that can be devised for digital art, as are the sums of money passing hands for NFT art - and it is only just beginning.