Smartphones: Can they be truly eco-friendly?

A smartphone is a portable device that combines mobile telephone and computing functions into one unit. They are distinguished from feature phones by their stronger hardware capabilities and extensive mobile operating systems, which facilitate wider software, internet, and multimedia functionality, alongside core phone functions such as voice calls and text messaging. (Source: Wikipedia) 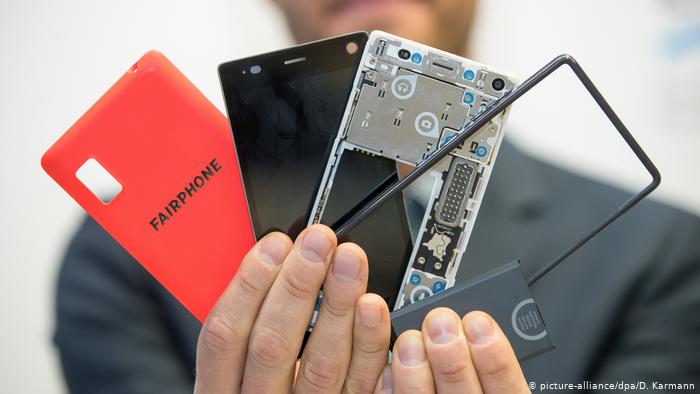 Cellphones have a huge environmental footprint. One company trying to change this is Fairphone. As they announce their latest offering, DW asks whether a no-impact smartphone is even possible.

The average smartphone is millions of times more powerful than the computers that guided NASA astronauts to the moon.

That's quite something, given that they tend to weigh less than 200 grams, or less than half a pound. But for all their physical lightness, they have a heavy carbon footprint. Besides being responsible for between 40 kilograms (88.2 pounds) and 80 kilograms of carbon dioxide (CO2), the production process also requires the extraction of heavy metals like gold and cobalt which often causes toxic pollution to leak from mines and refineries.

As leading phone manufacturers have taken to launching new models on a regular basis, thereby encouraging older ones to be discarded more quickly, one company has come to stand out from the crowd. Fairphone, which claims to make "no secret" of putting "people and planet" first, embraces a modular design to increase the lifespan of its products by making them easier to repair.

Nine years after releasing its first model, the Netherlands-based company is now poised to launch Fairphone 4, following the announcement on September 30. But how sustainable are they?

A look at Fairphone

In the company's own 2017 recycling report, it admitted that only 30% of materials used in Fairphone 2 could be recycled. That had risen to 50% in their 2020 impact report which looked at the recyclability rate of materials in the Fairphone 3.

How that compares to other manufacturers is hard to say. According to environmental group Greenpeace, Apple is far more transparent than most other phonemakers, yet even they don't publish information on the recyclability of their phones.

What is clear, however, is that each gram of precious heavy metals recovered from a Fairphone is a gram that doesn't have to be blasted from a mine or the side of a mountain and transported across the world for processing.

But one thing Fairphone doesn't have, is a decarbonization plan. According to Monique Lempers, the company's innovation impact director, they are in the process of drafting such targets, but until now have sought to reduce emissions by extending the longevity of their phones.

"We calculated that if we set a lifespan target of 4 1/2 years, this would reduce the carbon footprint of the phone by 30%," Lempers mentioned.

Their phones are modular, meaning individual components can be swapped if damaged or outdated. This is unlike most other phones, which if broken, often have to be replaced entirely.

For this reason, Fairphones score 10/10 on iFixit's repairability ranking, compared with only 6/10 for the iPhone 12. iFixit is a US wiki-based site that teaches consumers how to repair their own devices, as well as providing repairs advice from their shops.

According to Lempers, early indications suggest that on average, Fairphone 3 is used for up to five years, more than double that of a typical smartphone.

"Using this technology for longer can have a huge effect," Matthias Huisken, iFixit's managing director, mentioned DW. "Not replacing these things every two to three years but instead replacing them every five or every 10 would make a huge difference."

Too small to call the shots?

Yet for all their good intentions, Fairphone's aims are frustrated by a lack of control.

"If you can't do your mobile banking safely on the phone anymore because there's no more security updates, even though the hardware may be perfectly functioning, you're very likely to replace it because you want a phone that's safe and up-to-date," according to Huisken.

"To gain more control over these aspects, they need to grow. They need to become more relevant," he added.

Fairphone's aim, however, is not to compete with the major smartphone makers. According to Lemper, "We want to make the electronics industry more responsible, by showing that there is a market for an ethical and sustainable phone" .

She regards the company's smaller size as a positive. "We see that some of our peers are more afraid to take the risk to invest or source from certain factories or mines that require support," she continued. "I think being smaller comes with advantages as well as with challenges."

Is a zero-impact phone even possible?

"I think getting to zero might be challenging. It's about getting very close," according to Lotfi Belkhir, an engineering professor at Canada's McMaster University and co-author of a 2017 study quantifying the carbon footprint of networking devices.

He is of the opinion that a no-impact phone is only possible when every part of the supply chain matches up. In the case of Fairphone that would mean Google, and those who manufacture their hardware would also have to be no-impact.

"You can't just be an isolated company, no matter how noble and how dedicated and smart you are and be able to succeed in this kind of system."

But he describes himself as a "big believer in entrepreneurs" and mentioned success stories of companies can inspire and prove what is doable.

"Tesla has, from a single small company, been able to force the hand of almost all car manufacturers to go into electric cars. And today, their market value is bigger than all the big three in the US."